So the woman in this photo is actually me. I swear that really is the truth. I even made it into an issue of Alabama Living Magazine. The irony is not lost on me. “White Woman Shoots Giant Gun”, is every Alabama Living reporter’s wet dream of a headline. However, the joke’s on them, because I’m about to argue my ass off for gun control. Despite what many would have you believe, the Second Amendment was not about individual gun ownership, self-defense or protecting you from the tyranny of your government.

“A well regulated Militia, being necessary to the security of a free State, the right of the people to keep and bear Arms, shall not be infringed.”

When this amendment was written the United States did not have a real standing army. It had MILITIAS. I point you to the literal text of the second amendment as proof. The founding fathers believed standing armies to be a threat to the Republic, so they created this right to protect American citizens, not from their own government, but from the tyranny of invading armies. If a foreign nation were to invade, these militias would be called upon to act as the armed forces.

FYI, this was also NOT what they had in mind…

The interpretation that the Second Amendment allows for personal gun ownership really didn’t come around until the Supreme Court Case, D.C vs. Heller. Where even then Justice Antonin – jiggery pokery I look like a bulldog – Scalia seen here in this ACTUAL photo of him…

“Like most rights, the right secured by the Second Amendment is not unlimited…”. It is “…not a right to keep and carry any weapon whatsoever in any manner whatsoever and for whatever purpose.”

So clearly, the concept that your right to gun ownership cannot in any way be infringed upon is, in the immortal words of Justice Scalia… Argle Bargle. It may have been the Swedish Chef that said that, but I’m almost 100% sure it was Scalia.

So just for shits and giggles let’s say Justice Schmarkle Farkle got it wrong, as did innumerable historians, and the purpose of the second amendment is indeed meant to protect individual American Citizens from the United States Government. Why can’t we stroll into a Walmart and buy a goddamn tank? What’s to stop us from setting up nuclear silos in our back yards? That’s a big fucking gun I’m shooting, but I don’t think it would be very effective against this… 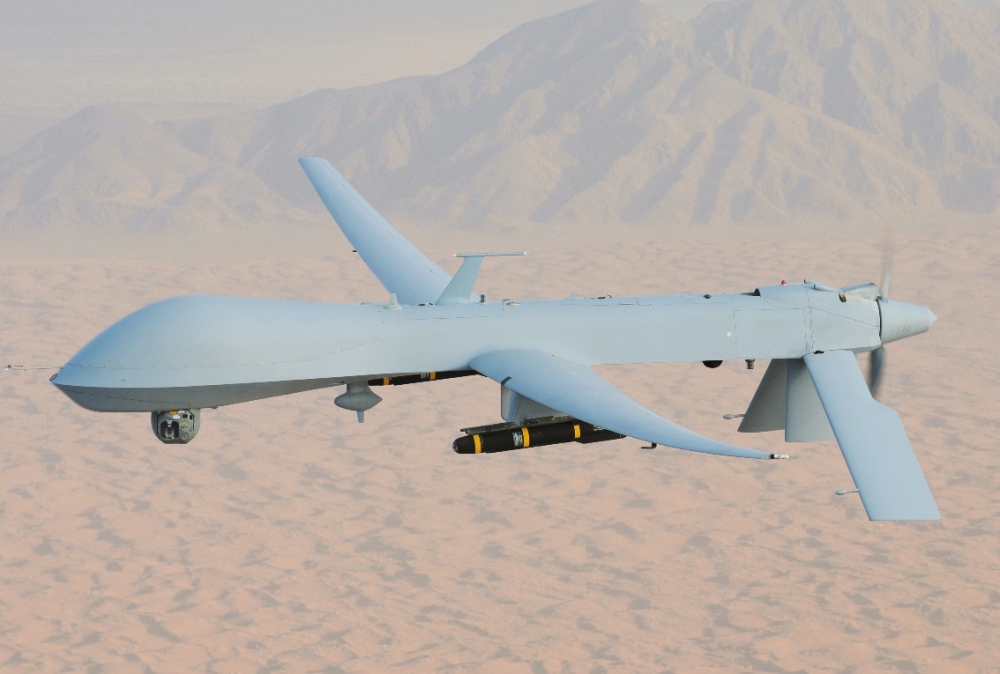 And it’s sad to realize, that considering our current political situation, I honestly believe someone might read this and think, “We should start a National Predator Drone Association”.

But anyway, who are these shady people in the government you’re so afraid of and how are they going to take away our freedom? I’m no Trump fan (I’m guessing you’re all thinking, “Well slap my ass and call me Sally, shocking”) but even I believe that he’ll eventually either get ousted from office via election, or serve out his two terms and that will be the end. (PLEASE GOD DON’T LET IT BE TWO TERMS). We put these people into power and we take them out. If they make a law we don’t like, we take it to court. We have a whole system in place to ensure that we don’t have to overthrow our government, and that system comes from the same source of authority as the second amendment.

This system was written by the same people. It’s protected by the same process. It holds the same amount of authority. And it has a much higher success rate, than does armed insurrection. Because while there was that one time we did try to use guns, that ended disastrously. And spoiler alert, the government won. However, when we utilize other Constitutional methods and remedies to resolve our issues, while it’s certainly not as exciting or fascinating to study – Ken Burns won’t be making a documentary about it anytime soon –  it does work. And, amazingly thousands of people have never been killed by Constitutional Procedure. Bored maybe, but not killed.

Handsome fella’, right? A real keeper. But aside from his George Clooney-esque good looks, I wouldn’t assume he was the most rational of men. Perhaps it’s the 69 tattooed on his face, or maybe it’s just me, but I don’t believe this gentleman takes the time to really think things through. Which is why, guns don’t deter crime.

Only a rational person would stop and consider whether the person they’re about to mug is armed. Meth heads holding up a convenience store? Not rational. Crimes of passion? Also, not rational. Rapists? Yeah… No. To lead a law abiding life, is the most effective deterrent to crime available to us. And yes, there may still be times that you fall victim to some lunatic who thought facial tattoos were a good idea. But let’s really think about what a gun could do in those instances.

First of all, the victim would have to have in depth knowledge of self defense legalities, when can you kill and when can’t you kill. Unless of course that person was an unarmed black man, black woman, black child or any shade darker than the cast of Jersey Shore. But that’s a different post. After that, one would also need at least average tactile competency in regard to firearms. Unlike this gem…

I mean, I give her credit for having the courage and body to pull off skin tight, white pants, but a solid “F” when it comes to responsible gun ownership. Also, I think her fly is open and I fully expect her to be a Fox News host in the near future.

They would then have to rewire their lizard brain from fight/flight/freeze, in order to be able to access this knowledge, while also simultaneously interpreting a highly stressful situation wherein they were being physically assaulted. And after ALL of that they would still have to be able to look a person in the eye and pull the trigger. Most likely, this person would be someone you are at least acquainted with, since most perpetrators are friends, family members, spouses, etc., of the people they’re preying upon.

Special forces, S.W.A.T teams, police officers, they spend YEARS honing these skills in order to be able to do this. Owning and carrying a gun does not automatically make you Bruce Willis, Chuck Norris or Batman. Clearly, because Batman didn’t need a gun. But anyway, this is NOT a movie. It doesn’t work like that. EVER.

To make the understatement of the century, we’ve had a lot of mass shootings in the U.S. How many have been stopped by the “good guy with a gun”? The good guy that WASN’T wearing a badge and just happened to be packing heat when a gun man started mowing children down. Per the definition of a mass shooting, America has one per day. That’s a large enough statistical sample, in enough random places, that if the good guy with a gun was going to stop the bad guy with a gun IT WOULD HAVE HAPPENED BY NOW. Besides, criminal behavior isn’t static. The majority of the time it’s fluid. Meaning the good guy with a gun, is just that until he no longer is. Simply because someone is law-abiding when they purchase a gun, does not mean that they won’t at some point snap.

So I don’t begrudge you your gun. But I do take issue with intellectual dishonesty. Such as those moments when politicians blame doors, as opposed easily obtainable firearms. I mean, the last time I remember a door causing bodily harm was when I drunkenly walked through my screen door during a party in college. That’s a true story. Or when the NRA insists that gun reform and legislation is unconstitutional or ineffective. No other comparable country suffers the number of gun deaths per year that America does, however they all have bullies, crazy people, criminals and yes even doors. What they don’t have is this…

If you want to own a gun, if you want to own MANY guns that’s your choice. But stop trying to justify why you own them. You own them because they’re fun. They’re sexy. They make you feel badass. It’s sport. But your feeling like a badass is not a good enough reason for tens of thousands of people to die each year from gun violence.

You can keep your gun, but you have to compromise too. And yes, criminals will find a way no matter what you do. But we still have laws against theft, murder and rape and a whole bunch of other shit. Such as in Arizona where it’s illegal to let a donkey sleep in your bathtub. That is 100%, a real law in Arizona. However, not once have I ever heard a person say, “Well people are going to kill each other no matter what we do so we should just repeal homicide laws”. Because that’s fucking stupid. It’s a stupid argument. I’m sorry, that’s not a nice thing for me to say, but it’s TRUE.

Here is my final thought. A lot of people say that the gun isn’t the issue. That it’s just an inanimate object. The gun doesn’t kill people, people kill people. If that is true, and a gun has no more inherent capacity to cause harm than any other inanimate object, why is it so necessary for your safety and freedom? In order for you to claim that a firearm is so important for your well-being and protection against tyranny, that it is deserving of Constitutional protection so pure even basic regulations cannot be passed, than there must be something special about that gun. It can’t on one hand be just an inanimate object, and on the other hand be imperative to your safety and freedom. Until you can reconcile that flaw in your logic, the claim that common sense gun reform is a violation of your rights is what Scalia would call a bunch of ferken berken.