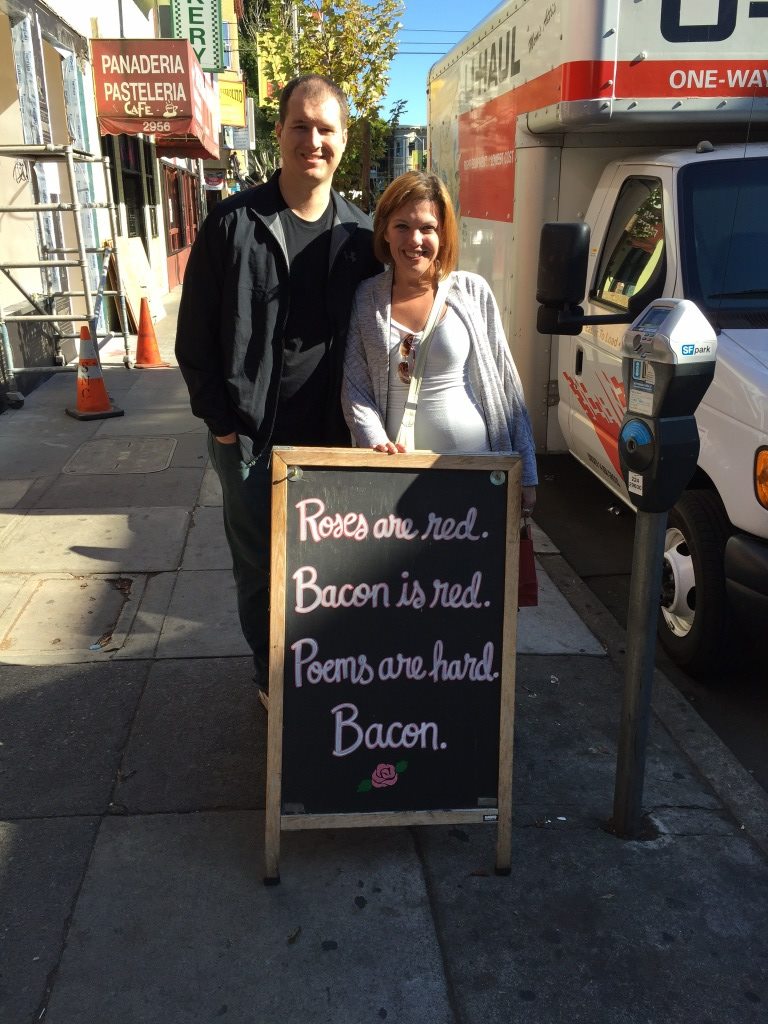 I’m taking a break from social issues to post about my most deeply personal issue to date. My weight. That’s me up there, with the banging hot body. What you’re about to find out is that I was so consumed with the fact that the sign said “Bacon” and I might get to eat some, that I didn’t fully enjoy how ridiculously hot I was. To understand that, we need to go back to the beginning, about 30 years ago.

The first time I realized I wasn’t “skinny” I was six years old. It was during one of my T-Ball games, and I was running to the outfield (my go to position for the entirety of my ill fated softball career). First, I realized running sucked and I was slow. I knew I was slow because my friend Sarah from down the street was running in front of me. Watching her little legs fly, I realized that when she bent them I could see the tendons in the back of her knee. My legs did NOT look like this. My thighs touched and I had cankles. I didn’t know cankle was the technical term for them, but I did know that my foot should not be attached to my calf. There was supposed to be something in between. On a side note, these made me the most badass roller skater ever. I’m like a redwood tree on four wheels.

I was a strong kid. Not just physically, but emotionally too. Not long after that T-Ball game I lost two grandparents and my father was diagnosed with terminal cancer. I like to think I handled this, and my dad’s eventual passing when I was 12 like a champ. Maintained good grades. Didn’t get in trouble. Had a steady friend group. These extreme stressors were not enough to slow me down. I just kept plowing forward. The one thing that could throw me into a tailspin was the mention of my weight. My parents and family insisted that I was big boned, or that it was baby fat, but let’s be real I’m not stupid. I was a big kid. And even though my brain knew that, the mention of it was my weak spot. Kids could sniff this out like blood hounds, evil little fuckers that they can be. When they’d mention that my father looked like an alien with his bald, chemo head I took it like a champ and told them to kick rocks. One time I legitimately kicked a rock at someone for that. Call me fat, and I’d be in the bathroom crying for an hour. I don’t know why, this was my sore spot, but it undeniably was.

Thus began my epic journey of yo-yoing. The first time I went on a major diet I was 15. I wanted guys to like me, so I started counting calories. I lost 50 pounds. That lasted for a year. The next time was right after I saw my senior pictures. I hated how I looked. The unibrow and uncombed hair could have contributed to that, but it was mostly the weight. For a year straight I ate less than 30 grams of fat per day. I don’t know if you’re aware, but that’s not a lot. The weight fell off. I lost 100 pounds and entered college with a new sense of self. I wasn’t the smart girl anymore, I was the hot girl (I also figured out how to do my eyebrows and hair, FYI). The hot girl, who no longer had any girlfriends. Whether this was because I was relishing in my new looks, or mean girl mentality, or just flimsy friendship, I lost all but those who I’d been friends with since kindergarten. But who cared, right? I now had boys. On a second side note, I was soon to realize that boys kind of suck.

For most of my twenties I was able to keep the majority of the weight off. But the toll it took on my mental state was irreversible. Everything I put in my mouth came with a not so healthy dose of, “What will this do to my weight”. I could never just sit down and eat. It was ALWAYS there in my head, and it was EXHAUSTING. I exhausted myself into not caring. Oh, I still thought about it every time I ate, I just started to eat like a normal person. Ooops. The weight came back on. By the time I was 30, I’d gained that 100 pounds back. By the time I was 31, I’d lost it and by the time I was 32 I’d gained again.

At 32, I’d achieved two degrees and one professional certificate. I’d lived in a tent for two years helping at risk youth. I’d moved to D.C on my own and built a life. I’d landed a good job working with the DOJ. I should have been content. I was healthy, although overweight. I had great friends. An amazing family. But I wasn’t content. So I vowed to lose the weight again. I spent two years eating, and I’m not making this up, nothing but whole wheat noodles tossed in olive oil. This produced the woman in the picture above. Who hung around for another year after that. But as the saying goes, man cannot survive on whole wheat noodles tossed in olive oil alone. Or something like that. I started eating like a normal human being again. I continued to work out. I gained a massive amount of weight. It all came back. It’s like my body was saying, “Fuck you! Pander to me or I will destroy the one thing you wish for the most! Ankles!”

I’ve now spent two more years trying everything. I regimented my schedule so that I could go to bed at 7:30 to get up at 5:00 for CrossFit. I spent six months eating nothing but raw vegetables. I spent a year eating one, pre-made paleo meal, less than 500 calories a day. I didn’t fucking lose a pound. Not a goddamn, mother fucking, monkey licking, cock sucking pound. I sacrificed my life for over a year to achieve this goal, and I got squat.

And then it occurred to me. Who fucking cares? I can keep trying, and I will, but the obsession ends today. Let the re-wiring of my brain begin, as I pour my deepest, darkest weak spot onto the internet for everyone to read. It’s been over two decades since I could eat a meal without a chorus of warning sirens and evil self talk going off in my head. I’m so over it. I’m so exhausted. I’m over the cha-cha line of pizza slices dancing through my brain and flipping me their greasy middle fingers, or whatever the pizza equivalent to the finger is. When I think of young girls in my position, I do not want them to become what I have become. An obsessed, neurotic, sometimes twitching, mess who can’t enjoy a meal in peace. All this time it was my physical health I was concerned about, when I was slowly losing what little bit of mental health I had maintained into my 30’s. I need that sanity for important things, like not strangling the lady in front of me at the pharmacy. Who asks for a price check on, hand to God, 10 items while in the pharmacy line? Take that shit to the main counter. Gah! See, I can’t be using up all my good sanity on french fries. Next week I go on a cruise and I’m going to wear strappy sandals that give me cankle cleavage. You know, when the strap is too tight so your ankle kind of looks like a butt in a thong? And you best believe I will be flashing these championship cankles with pride.