I’ve been surrounded by successful women my entire life. Women who I have watched build careers, obtain advanced degrees, create loving homes and rise from ashes to start all over after they’ve lost everything. When I think of the pillars of strength in my life they all have girl parts. Even more impressive, they can fucking walk in high heels. How do you DO that? I’m a woman in my 30’s and still have not figured out their secret. Think drunken, giraffe on roller skates. But anyway these women are diverse in culture, race, politics, religion, but they all have one thing in common. Autonomy over their own bodies and the right to choose.

Let’s play some semantics. We’ll start with “Pro-Life”. If one follows that logic through to its end, it appears to assume that people who believe in choice are “Anti-Life”. Au contraire. This debate is not about “life” per se. No one is “Anti-Life”. The pro-choice crowd doesn’t go around thinking, “Well shit, we really just need some more death up in this bitch”. Except for maybe this guy…

Who contrary to what Mike Pence may believe, is not representative of your typical abortion provider.

Then there’s “Pro-Abortion”. Surprisingly the answer to, “What do you want to do tonight, ladies?” has NEVER been, “Oh, I don’t know drink some wine, maybe get an abortion?” So really, the proper terms here are “Anti-Abortion”, because although no one dreams of one day having an abortion there ARE people vehemently against it, and “Pro-Choice”. The very essence of being pro-choice, is that you’re allowed to CHOOSE (mind blown, I know). Hence, pro-choice people don’t have a problem with someone being anti-abortion. The problem lies when anti-abortion becomes “Anti-Choice” or “Pro-Birth”. 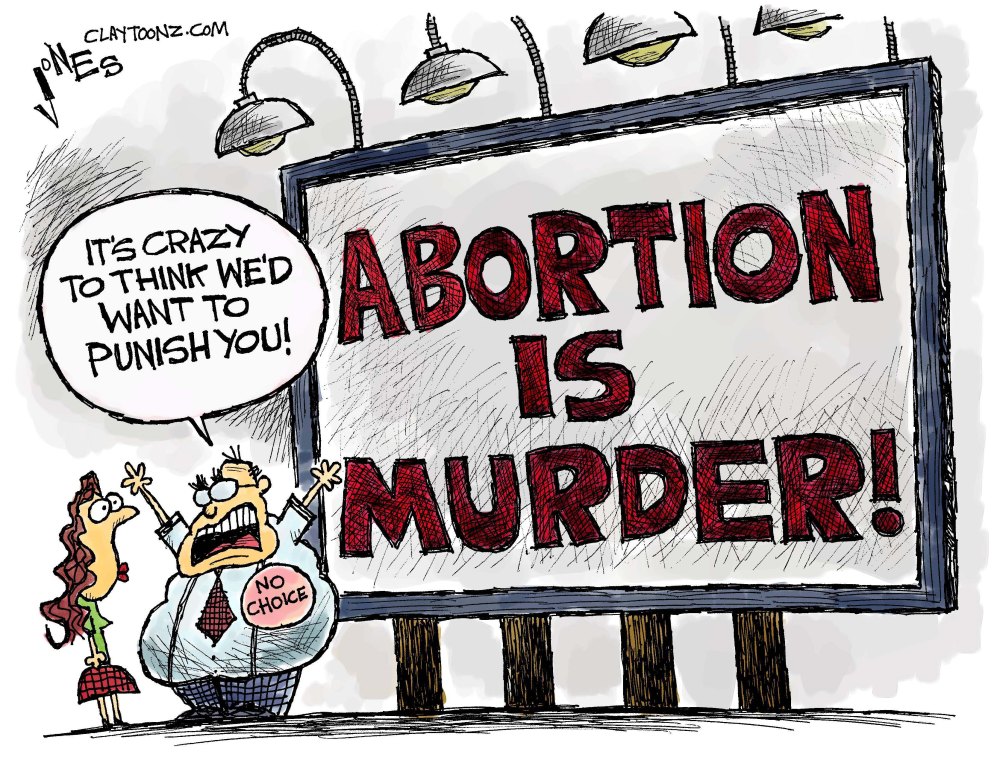 Anti-choice is the result of anti-abortion on steroids. When one attempts to regulate others based on their, personal position. No pro-choice advocate will EVER FORCE someone to have an abortion against their will. We would appreciate it, if in return no one attempted to FORCE us to be pregnant against OUR will. Pro-birth, goes ahead and just slathers on an extra layer of “ARE YOU FUCKING KIDDING ME”. When one is so adamantly against abortion they want it criminalized, regardless of circumstances like rape or incest. When even contraception is off the table, because fertilized eggs are human beings.

They also are proponents of the death penalty, advocates for cutting food assistance and rail about their tax dollars going to anything that would even resemble a social welfare program. So, no. I’m sorry. You CANNOT say you are pro-life without treating all human life and the quality thereof, as sacred. And just a quick FYI, in case you were wondering, NO your tax dollars DO NOT fund abortion. The Hyde Amendment prohibits public funding being used for this procedure. And yes, money is fungible, but math is not. If those funds are subtracted from what is given to clinics, that money is lost to them. Period.

So what does “life” mean in this context. Because a lot of things are alive. Take for example, the mold growing on the ground beef in the back of my fridge right now. That’s alive. But no, that basic concept of “life” doesn’t work here. A zygote or embryo? Well about 50% of those are flushed without our knowledge, so if those are lives they’re literally in the crapper. How about a heart beat? Well sure it’s a SIGN of life, however lots of things have heartbeats. The food that you could be shoving in your mouth as you read this may have once had a heartbeat. Also, some living things DON’T have heartbeats. Like trees, or Kellyanne Conway. In fact, I would say “life” is the wrong term altogether. When we’re debating abortion, we’re actually arguing about when HUMANITY begins and that’s why this gets tricky. Because humanity is way more complicated than merely “life”.

Okay, when does humanity begin? Well, strap in because this is going to be a roller coaster ride of theoretical debate. Theoretical Debate, also being the name of the most boring roller coaster ever built.

Not even scientists can really answer this. You have to ask, what makes human life different and deserving of specific rights and protections? On the surface this appears to be a simple question, but I’m willing to guess most people’s knee jerk response to it was, “Well because we’re human”. Yeah, that doesn’t work, it’s tautological… “Human life is special because it’s human”. Um, no. Until you can resolve that, you can’t even begin to determine the initial moment a human begins. Because the answer to that question (we’ll call it XX to make the bouncing ball easier to follow and because girls rule) would be just our starting point to figuring this out. Next you would have to show at what point in gestation XX occurs. Only after you know what XX is and when XX happens, will you be able to say, “Humanity starts at”. FYI, proving or knowing this does not include any of the following…

Because that’s not proof. That’s BELIEF.

So science has a multitude of answers about life, however none can give us the what and when of XX. Spirituality and religions give us a plethora of beliefs for the what and when of XX, but none of them hold water scientifically. So what DO we actually know without a shadow of a doubt to be true. We KNOW that women are in possession of full human status, with all of the rights and protections that comes with said status. (Let me put a quick disclaimer on that last sentence… Kind of in possession of that status. But that’s a different blog). We know that we can’t conclusively answer what XX is or when it occurs and ergo do not know when humanity starts. So, to sum it up we’re kind of fucked. But because we live in a secular society with protected rights, we have to err on the side of caution and not restrict rights for all based on the subjective beliefs of some. Like I said, the most boring roller coaster ever, but now we get to talk about sperm so this should get good again. Because sperm is just objectively funny. Just look at it… 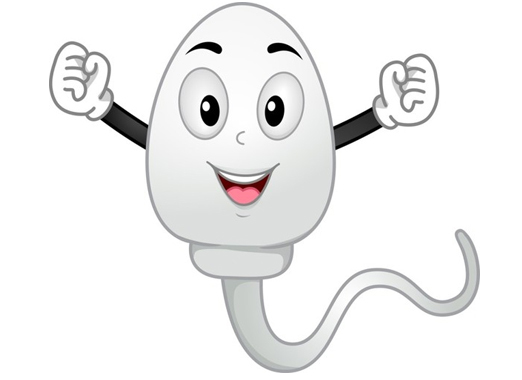 I bet you never knew sperm had eyes and thumbs. That’s true.

So this is normally the point where someone of the male variety will burst into the discussion and say, “Well, what if my beliefs are different from HER beliefs? Don’t I get a say?” I’ve got good news for you gentlemen. You do. Your sperm is part of your body, therefore it’s your responsibility and what you do with it is your way of getting to have a say in this. If you are anti-abortion I would suggest wrapping that shit up, double wrapping it if necessary, or just keeping it to yourself so to speak. However once you decide to shoot it out into the vagina world, it becomes part of OUR bodies and possession is nine-tenths of the law. You give up the sperm, you give up the right to what happens with the sperm.

And yes, I know shit happens and no one can be 100% responsible 100% of the time. That’s just not possible due to human nature. Condoms break. Birth control fails. You run into an incredibly horny Charlie Hunnam who wants to jump your bones. Acts of nature that could definitely happen and unfortunately lead to unwanted pregnancies. (Side note. If you don’t know who Charlie Hunnam is google him, I promise it is worth it). But all this means is that access to safe and easy abortion is necessary. Because there are a couple of other things we do know. Humans are not going to stop humping each other. Ever. Shit does happen. Women will continue to get pregnant regardless of precautions. And if they have to they WILL seek an abortion by any means available to them. Anti-choice, pro-birth IT DOESN’T MATTER. You will NEVER stop abortion. It’s been with us since the first cave woman pushed out her 10th kid and was like, “Fuck that shit. I’m done”.

All you will do, is shove abortion underground and endanger the lives of women.

So as someone who is vehemently pro-choice I will tell you this. I do not know, nor can I possibly predict, what I would do if I found myself pregnant and incapable of raising a child. However, I do know what it feels like to be scared, confused, desperate, doubtful or any of the multitude of emotions that may or may not (and that’s okay too), accompany making this choice. And considering our inability to scientifically prove, legally codify or even spiritually agree on the most pivotal part of this issue (XX), I cannot in good faith state that this decision should be made by anyone other than the person who actually is living it. And I can guaran-damn-tee you that person is going to have a uterus. So do, or do not ladies, but there is no universally proven right or wrong answer. The choice is, and always will be, yours. And only over my cold, dead uterus will they be able to take it away. Side note… Cold, dead uterus is what White House officials have nicknamed Kellyanne Conway.