The old idiom goes, “It takes one to know one”. So let me present myself as America’s leading authority on shit shows. My credentials include the following three instances which are all 100% true. And I would be remiss if I didn’t tell you that only one of these happened while I was inebriated. I managed to pull off the other two while I was sober…

This list is not even close to being exhaustive however, for the sake of my mother, I’m going to leave it there. But believe me when I tell you, if I ever become famous and someone writes my biography it will be entitled, “Sarah: A True Shit Show”.

Therefore, when it comes to recognizing situations that can best be described through the sentiment, “Is this real life”, I’m the lady you want around. All of this vast experience has informed my opinion (read fact), regarding the Trump Administration. That opinion being, what in the actual fuck???

Cumquat Twittler. Sweaty, fascist cheese cube. Totalitarian orangutan taint. Super virus in man form. Authoritarian, melting, traffic cone. Despotic glob of coagulated bacon grease. Halfway sentient Tupperware container of moldy acorn squash and broken dreams. Whatever your nickname of choice for him is, he’s fucking batshit. On a side note, I encourage anyone reading this to leave their favorite descriptors for him in the comments section. These days, I can always use the chuckle.

This is the “distinguished” leader of the free world, who managed to stare directly at the sun during a solar eclipse, and whenever he speaks sounds like someone threw a dictionary and Hitler into a spin cycle and set it to “Full Crazy”.  He even fucked up his wife’s name on Twitter…

Bill Gates recently exposed that on more than one occasion this orange shitgibbon has asked him to explain the difference between HPV and HIV. It was because, and this is a FACT, he wanted to make sure he let Melania know what to have the doctors screen her for.

“Melania, you should have them test you for HIV, HPV, WTF, STFU, LOL, SMH and IMHO. But don’t worry, I hear they’re doing great things for STFU these days. Really. Believe me. You have nothing to worry about. It’s gonna be so great.”

I can only assume he believed he caught all of these “diseases” from whoever the fuck, “Melanie” is.

And now, Trump assumes he’s going to garner peace on the Korean Peninsula and convince Kim Jong Un to hand over all of his nuclear weapons. As though the road to peace is paved with unhinged tweets and spray tan. Am I the only person who thinks that North Korea’s spontaneous willingness to talk, is just a little bit suspicious? That after decades of this family reigning over one of the most authoritarian regimes of the modern era, Kim Jong Un just happens to want to sit down once we elect a B-List reality star that stares directly into the sun?

But what would an insane clown be without his “posse”?

Of course, there’s Princess Complicity. Besides being the child Trump most wants to sleep with, she has her own personal laundry list of, “What the hell?” She’s been galavanting all over the world acting as some sort of royal emissary, despite not being given an official title until almost six months into Trump’s presidency. After ethical concerns were raised regarding conflicts of interest, daddy bestowed her with the title, “Special Advisor”. Advisor on what? How to make handbags and not give your employees maternity leave? She’s stood in for her father at top level diplomatic meetings, while having the same experience and credentials as Paris Fucking Hilton.

However, her most egregious moments have come when asked about the sexual harassment allegations against her father. When one reporter inquired about her opinion on them, the first lady of nepotism stated…

“I think it’s a pretty inappropriate question to ask a daughter, if she believes the accusers of her father, when he’s affirmatively stated that there’s no truth to it. I don’t think that’s a question you would ask many other daughters.”

Well my dear, you’re not “many other daughters”. You’re a “special advisor” to a president that’s facing multiple allegations of sexual misconduct. I have a gigantic head. Literally, it’s disproportionate to the size of my body, but not even I can pull off wearing two hats simultaneously. If you don’t want to talk about daddy’s history of abusing women, than perhaps you shouldn’t be daddy’s go-to girl whenever he wants to stay at home and eat KFC instead of doing his job. And lest we forget, these accusers include her own mother, who stated in a sworn deposition that Trump violently raped her.

Then we have the Demon Seed himself, Don Jr. When this dude is at home, you just know that he speaks in the third person and wears socks with his crocs. That is the 100% TRUTH. He is absolutely, “that guy”. This genius also decided to take half of his kid’s Halloween candy away, in order to teach her about the “perils” of socialism. 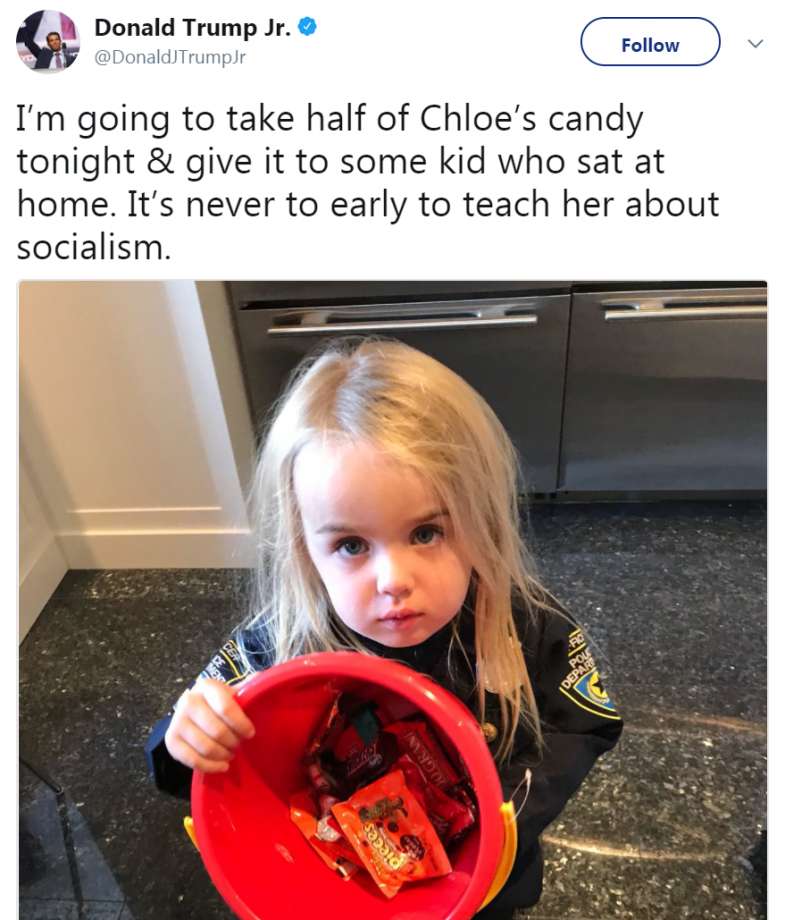 First of all, you know he only did that because his father was craving a Kit Kat and Donnie Jr. wanted to suck up to him. Second, really? Wouldn’t the socialism part have been when the community equally distributed the candy they spent their personal money on, to the neighborhood children?

He has the IQ of a hair ball. His idiotic tweets are akin to the jelly of the month club; They’re the gift that keeps on giving. If, you know, jelly was Putin turds and instead of per month they arrived daily.

Plus, the man has no chin. Minor in the grand scheme of things, but also very true. 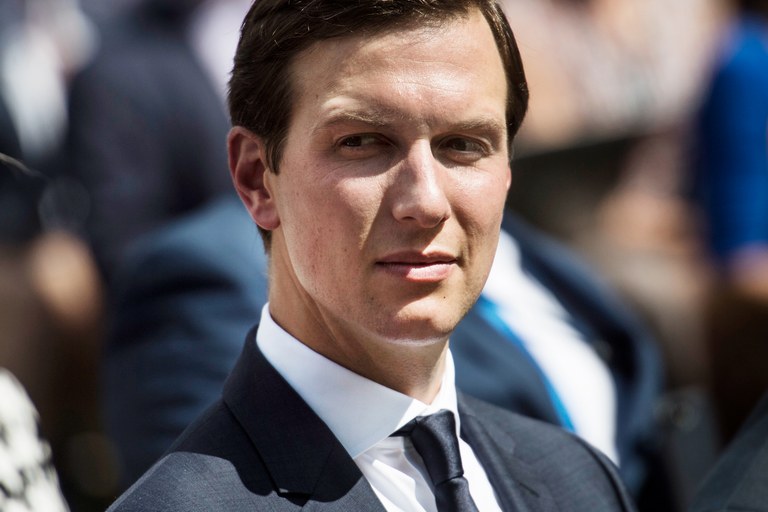 I consider Kushner to be the “unforced error” in the Trump family. They actually chose this malevolent yeast infection. He wasn’t simply created from the incredibly shallow, puddle of viscous discharge that is the Trump gene pool.

J.K. here had his security clearance downgraded when it was brought to light that he had failed to disclose over 100 foreign contacts. And that was BEFORE, they found out that he had met with the Russians… In Trump Tower… With Demon Seed… Admittedly, to get dirt on Clinton.

I also want to give a special, honorable mention to some of my favorites that I simply don’t have time to list here. Betsy DeVos, who believes our schools need to be protected from Grizzly Bears. Ben Carson, who thinks the Egyptians built the pyramids to store grain. Scott Pruitt, who spent $43,000 dollars of tax payer money, on building a phone booth in his house. And then of course, there’s Ryan Zinke. Who had coins with his face on them made and distributed to workers at the Department of the Interior. I’m sure they’ll treasure them forever.

Catastrophically stupid. All of them.

Finally, there’s Eric and Tiffany Trump. Or as Donald likes to call them, “That other one” and “What was his name again?” I’m only mentioning them, because Jesus somebody has to.

Since the Insane Clown Posse and their Juggalos have taken over, the turnover rate in the White House is 43%. If a business had that level of employee turnover during its first 18 months, it would fail. As have, in what I’m sure is just a random coincidence, most of Carrot Caligula’s businesses. For some context, Ronald Reagan comes the closest to Trump in regard to turnover rate (17%) and the damn Container Store reports a whopping 10%.

Let’s face it. This man couldn’t run a 5K race, even if you let him drive a fucking car.

FYI, on another side note; Juggalos are a real thing. They’re Insane Clown Posse super fans that follow the band around. They’ve developed their own language and created a specific new culture. You know, like Trump supporters.

And don’t worry. This has not escaped the notice of the rest of the world. Since Trump took office, the world’s confidence in U.S. leadership has plummeted 18 percentage points. From 48% to 30%. Leaders and First Ladies from all over the globe have mocked him, snubbed him or outright burned him. The “drop mic” moment being awarded to the Prime Minister of New Zealand. Trump pointed at her during an international summit in Vietnam, stating…

“This lady caused a lot of upset in her country”

To which PM Arden replied…

“You know, no-one marched when I was elected.”

And now, I have to offer my sincerest apologies to the Insane Clown Posse. Because although I would rather eat albatross vomit, surrounded by cats who are pissing on piles of burning hair, than listen to anything they’ve produced. And even though this analogy on the surface appears to be spot on; I have to disclose that an underlying theme of their, um….. (music?) is anti-racism. Even Shaggy 2 Dope, one of the members, has stated, “Fuck Trump”.

They’ve also wrote other songs that it would behoove Trump to pay attention to. Such as, and this is REAL, “Bugs on Your Nuts”. Perhaps if he gave it a listen he could stop asking Bill Gates for STD diagnoses.