One of the lesser known Muppets, is Sam the Eagle. The Swedish Chef once called him the most underrated, “Burka Flurka” on the show. That is a fact. He really said that. It is also 100% true that the Muppets are God’s greatest gift to us. However, I’m only bringing them up here because Colin Kaepernick bear’s a striking resemblance to Sam the Eagle. And, considering my appreciation for a good muppet, this is in no way an insult. It is, however unequivocally true. 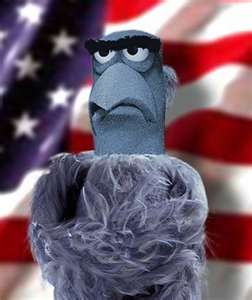 I mean, come on. There’s definitely a resemblance. It just so happens, that Sam the Eagle is also the muppet most known for his patriotism. Defending America is his “schtick”, which makes this comparison – while probably not the most flattering – truly applicable. Because Mr. Kaepernick is definitely a patriot, who is also in possession of a beak like nose.

When Colin first began his protest, it wasn’t by kneeling during the anthem. He actually refused to stand, so he sat on the bench throughout its playing. No one made a big deal out of this. Most people didn’t even see it. Maybe because they were too busy “respecting” the anthem and flag to take notice, but more likely that they were probably waiting in line to get $25.00 dollar beers. Because truly, nothing “honors” America like overpriced, watered down Bud Light. Either way, it wasn’t even a blip on our radar.

One of the few people who did notice, was a man named Nate Boyer. Boyer is both a former Seahawks player and a former Green Beret. Nate had the radical idea of (hold onto your butts, this is going to blow your mind) TALKING to Kap regarding his motivations. The two met up, discussed their views and Boyer informed Kap that, instead of sitting he should actually kneel.

But much like Sam the Eagle’s ironic resemblance to Colin, Boyer’s height is also beside the point. The point being, it was a white, veteran that told Kaepernick the appropriate way to protest during the anthem was to kneel. He explained to Kap that…

“Soldiers take a knee in front of a fallen brother’s grave, you know, to show respect.”

This is where the story takes a turn for the bizarre, because it turns out Kaepernick actually started the protest in response to Lay’s Potato Chips choosing “Crispy Taco” as their newest flavor, when clearly it should have been “Bacon Wrapped Jalapeno”.

Lying! That’s NOT the truth. Come back to me fellow white people, you need to keep reading. It is true however, that “Crispy Taco” got immediately deported because… Trump.

No. The real reason Colin Kaepernick began his protest was because of this…

Those are just some of the faces of the unarmed black men and women who have been shot by the police. It’s not exhaustive. Not even close. 2016 alone saw more than 250 black people shot by police officers, 39 of which were unarmed. The chance of a black person being shot by a cop is 2.7 times greater than that of a white person, even though white people outnumber black people by 160 million.

This was never about the flag or the anthem, and if all white people had the communication skills of Nate Boyer they’d know that. Because Kaepernick has stated, repeatedly that this protest was in response to police brutality and the treatment of minorities…

“To me, this is bigger than football and it would be selfish on my part to look the other way. There are bodies in the street and people getting paid leave and getting away with murder.”

And when the police have this type of track record in regards to black people, it honestly endangers black lives when people call the cops on them for things such as all of the following… 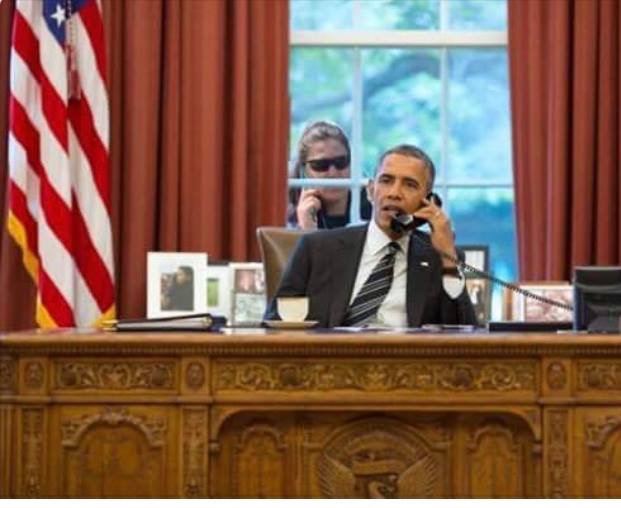 And of course, “President-ing”. Because this woman and photoshop are a never ending source of hilarity. For those of you who live in a vacuum, the lady peaking in on Obama is the “upstanding citizen” who, legitimately called the police because there was a black family having a barbecue in her vicinity. Is she afraid of delicious ribs and potato salad? Um, no. She’s afraid of black people.

Don’t get me wrong. I do have respect for law enforcement and understand that they have a difficult job to do. However, they chose that profession, fully informed of the risks that come with it. And those who have power bestowed on them, such as police officers, should absolutely be held to a higher standard. Over a 12 year span, only 35% of officers who killed unarmed black men have faced convictions and there are over 1,000 police shootings each year. Maybe I’m as confused as a fart in a fan factory, but if a business exhibited racial bias at a rate of 2:1, I’m pretty sure they’d get their asses rightfully sued.

So, no. This wasn’t about the anthem or the flag. Plus, I’d be willing to bet all the ranch dressing in the world (I’m trying to convey the seriousness of this to white people, and let’s face it we LOVE ranch dressing) that everyone who’s screaming about Colin Kaepernick and NFL players kneeling during the anthem, do not stand for it at home. That on more than one occasion, they’ve completely ignored it while standing in line for an 18-inch Schreiner’s hot dog, nestled in a Telera roll  and topped with fries, queso blanco, carne asada, pico de gallo and guacamole. This is a REAL thing. All that’s missing is the ranch dressing. Ranch dressing, because… White people.

These are the same people, who are so offended by Kap’s affront to the flag, that they do this… 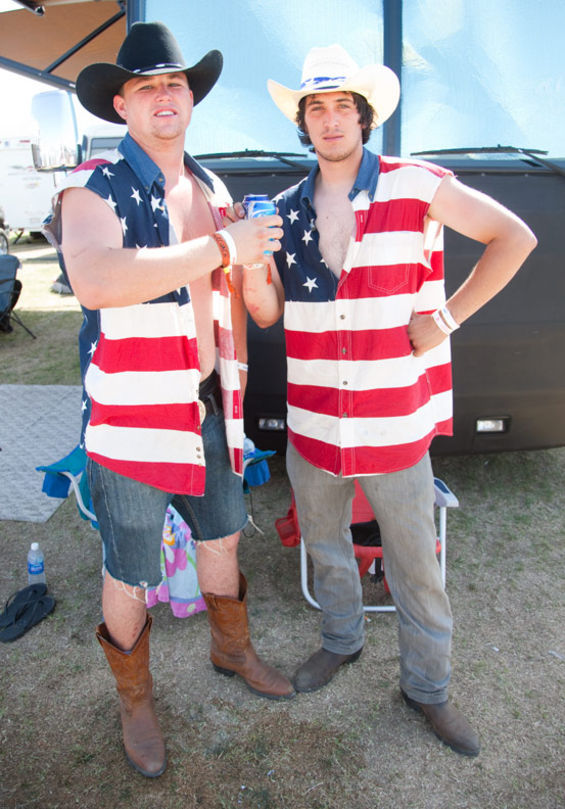 Yesterday, May 23rd, the NFL issued a ruling that institutes a fine on any team that has a player sit or kneel during the anthem. That same day, Fox News issued an opinion piece entitled, “Finally, we get our NFL back“. Authored, and I’m sure this will shock you, by a white dude. If this guy took a DNA test the results would say he’s 50% pumpkin spice and 50% paper pulp. That’s how white we’re talking.

Who does he mean by “our”? The white men and women who profit off of and are entertained by, the predominately black bodies that are doing physically laborious work on a field. That’s, who he means. And let’s keep it real. If the NFL belongs to any group of people, it is black men. 70% of it’s members are black. Without them, all you’d have is Tom Brady throwing to an empty field, ALL of the kickers and a handful of these dudes…

And you KNOW this guy wears jorts and eats a shit ton of ranch dressing. That is a FACT.

No, the bodies of African Americans are not “ours” to be entertained by, or to turn a profit off of; it isn’t our place to dictate their actions. Especially, when those actions are Constitutionally protected.

Of course the First Amendment only applies to government actions and public forums, and yes the NFL is a private business (mostly), but the issue isn’t completely cut and dry. Most stadiums are funded by tax-payer money so they are, at the very least, a quasi-public forum. Also, a player’s job  description does not include, “Standing for the anthem”. One could argue that they are in a public space and not acting in the capacity of their job, hence it would indeed be a violation of their rights to not allow them to kneel.

Let’s put this is in a different context. A more, shall we say caucasian, situational analogy. One that doesn’t include ranch dressing, but will still be easy for most white folks to understand. Walmart recently decided to stop selling assault rifles, so good for you Walmart.

FYI, “Good for you Walmart” was right under, “Trump is president” on my list of, “Shit I never thought I’d say”.

But anyway, let’s make the huge leap of logic needed, to assume that the NRA takes this as an attack on the Second Amendment. So they set up a protest on the grass separating the Walmart Parking lot and the public sidewalk. You know, so these people can do their “thing”… 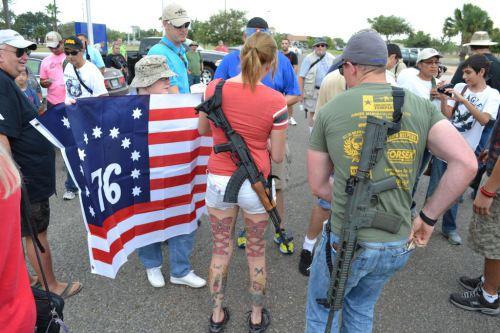 That picture’s whiter than a loaf of wonder bread, so we’ll run with it. The grassy area is most likely considered an easement. Where Walmart owns it, but the public is legally allowed to use it and some tax money goes into upkeep, such as a sewer drainage ditch that may run through it.

Stay with me here, Joe Whitey gets done with his shift at Walmart and being the faithful NRA member he is, goes and joins the protest. Still in his Walmart clothes, because he doesn’t want to waste time going home to change into his jorts. He’s got to get over there before the lady with the bitchin’ leg tattoos and giant phallic symbol hanging off her shoulders, leaves. Later, a bunch of his equally as white buddies see this and decide that’s a good idea, we like guns and leg tattoos too, so they also head over.

Should they be fired? Should Walmart fine them? Do you think Putin’s fascist colostomy bag dipped in Yeti pubes, would call them, “Sons of bitches“? Would the Despotic Melting Traffic Cone in Chief tell them they shouldn’t be in the country?

If you answered yes to any of those questions, you’re nuttier than Norman Bates’s testicles dipped in peanut butter. Just saying.

Yes. Professional athletes make a lot of money. However, all the money in the world can not buy off racism. Desmond Marrow, a former NFL player, just had the cops choke him. It’s on video, like a large percentage of police brutality towards black people. However, facts don’t matter anymore, so who gives a shit if you see it. People will still believe whatever story best fits their narrative of, “I’m special”.

But, as I said, yes relatively speaking black athletes are privileged. And that puts them in a unique position.

They have a platform and a microphone, not available to the average African American. Colin Kaepernick wasn’t just thinking of his own black body. He was thinking of Tamir, Philando, Eric, Michael, Oscar, Freddie, Alton…

Kap knew he had a special opportunity to shine light on an issue that effects all of his brothers and sisters, and I do not blame him for taking it. I applaud him. There is a difference between patriotism and nationalism. Sydney J. Harris once said…

Sam the Eagle wasn’t known for his nationalism. He was known for his patriotism. You can simultaneously respect your country, while still acknowledging that in some ways it is deeply flawed. I’m very happy with who I am, but I admit to having a wicked set of cankles. Just like I respect my country, but can recognize that we have quite the “case” of racism.

So I whole heartedly hope these men continue to exercise their rights. Because I mean, COME THE FUCK ON! Really?