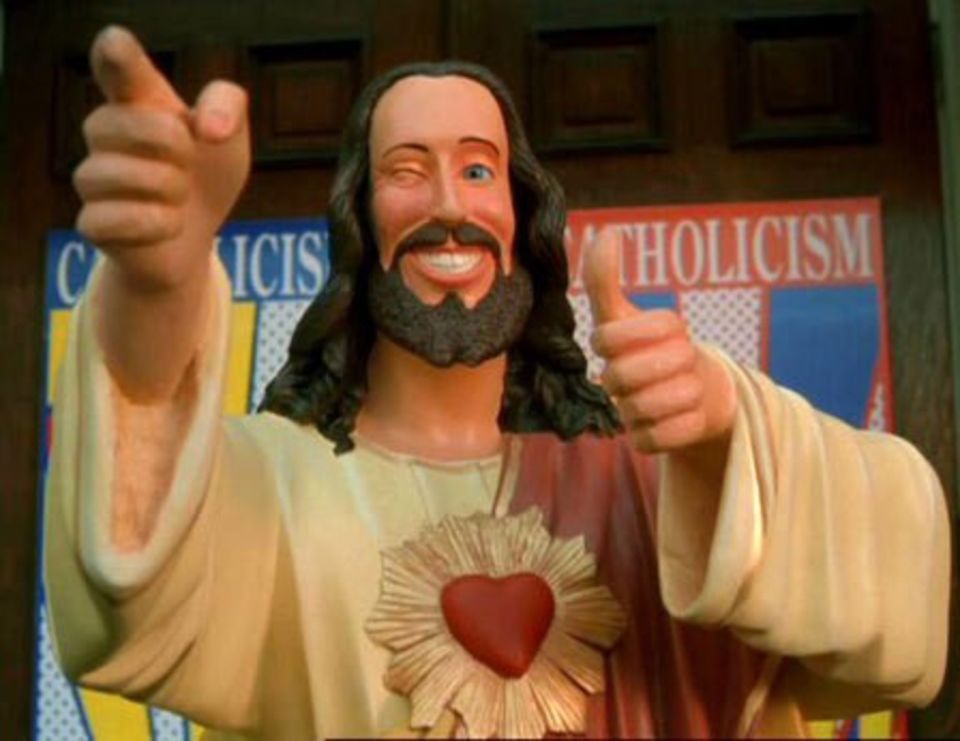 Much to the despair of my mother, I did not take to organized religion like the proverbial fish to water. She even threw me into the deep end of the metaphorical pool, in order to teach me how to swim with the Catholics. Then the Presbyterians. The Methodists. Even the non-denominational Christian church down the street, that had a JumboTron  and stadium seating. Each time I was like, “Yeah… Nope. I’m just going to fucking sink. Thanks, anyway”. It’s not that I have anything against religion, any religion, or the true believers who practice what they preach. I simply believe that no one group of people has really got it all figured out just yet, so the best I can do is live a righteous life and hope for the best. Fingers crossed.

However, there are some things that stuck. Take Jesus, for example. He sounds like a pretty cool dude. I’d totally drink a beer with that guy, and you know he’s not going to order some hoppy, craft beer that will cost you $20 dollars for a pint. It’s going to be a PBR. That’s a FACT. Jesus drinks PBR. It’s in the Bible. Don’t ask me where, but it is. Anyway, the stories about Jesus that resonated the most, were those where he came across as sort of a badass.

A RIGHTEOUS agitator for justice. Homeboy, could flip a table better than a housewife from New Jersey, and anyone who has ever spent time with me knows I enjoy a good brouhaha. Specifically, when said brouhaha is in defense of what I know to be right. And I’m not talking subjectively right. I’m speaking of straight up, undeniable moral truths. Like the fact that only schedule one douchebags wear RompHims. Objective, fact.

On a side note, everyone should be required to google RompHim and then photoshop Eric Trump’s face onto one of the models. Because you KNOW he owns one, and that shit is hilarious. 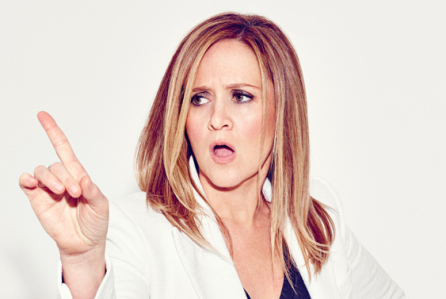 “Feckless cunt” is the 21st century’s, “temple table flip”. It is the inevitable result of righteous indignation, in the face of demonstrably horrible actions. Plus, it is most definitely an insult of Biblical proportions.

About four days ago, it was revealed that 1500 children whose parent’s brought them to the border in order to seek asylum, were ripped from their mother’s arms. And then… Lost. Or as Rick Santorum put it, “They’re not lost. We just can’t find them“. Sure. Because they’re like car keys, or remote controls. Or you know, First Ladies. (Melanie/Melania, whatever the hell your name is, where ARE you?) But meh, they’ll turn up, right you frothy mixture of lubricant and fecal matter? Have we checked under the coach yet?

Shut the fuck up, Rick.

Moving along… This, happened on Trump’s watch and as a direct result of his immigration policies. The day after this was reported Princess Complicity, who is a special advisor to the despotic, dutch oven in human form some call “President” – and who is active on all levels of his policy making – decided to tweet… The. Very. Next. Day. First, I’m so happy she knows where her kid is. Second, when the backlash started pouring in, which tends to happen when the person complicit in the loss of 1500 innocent children posts something of this ilk the day after they’re reported missing, she decided to “ignore the trolls“.

Yeah, people weren’t picking on her, because she misused, “to, two and too”. It’s not like they were commenting on how she’s so white and spoiled, her turds are pumpkin spice lattes. Trust me, on this. I know trolling. It’s my one, true talent. I may as well be living under a bridge and rocking wacky, neon hair by now. The response to this was INDIGNATION.

So when Sam Bee dropped the “feckless cunt” line, it was with the same righteous anger that Jesus used to flip that table in the temple. A culmination of 18 months of lies, complicity, families torn apart, rampant racism, ignorance… All of that and more, coming to a head. And standing in the middle of that shit storm, was this little twat waffle. In her perfectly matching galoshes and raincoat (which, FYI, were made in China, by women who were NOT allotted maternity leave), and while Russian hooker piss rained down on us, she smiled prettily and did daddy’s bidding.

So no, Princess Complicity. You didn’t get “trolled”. You got what the fuck was coming to you.

As did this lady… 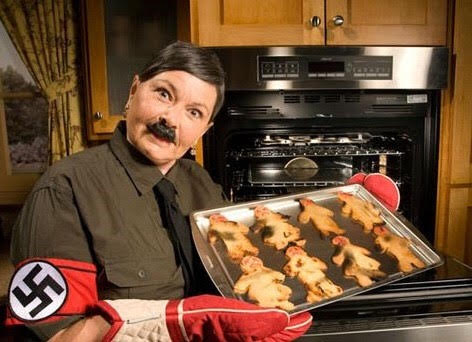 “VJ” is not a reference to her vagina. (I apologize for that cringe inducing mental picture). It stands for Valarie Jarrett. An African American woman who worked for the Obama administration. A lady, who in a shocking turn of events, has never been complicit in losing 1500 children. Or any of the other insidious, malarkey that Trump Administration officials can now put on their resumes.

Pro Tip: I would suggest listing “Insidious Malarkey” directly below “Baby Punching”, but above “Sucking Your Own Dick”, when you itemize your relevant experience. That should definitely land you the job of, “Evil clown that hides in children’s closets and softly whispers their names after the lights go off”.

Roseanne did apologize, but only after her show was cancelled and then she blamed the tweet on her nightly dose of Ambien. No, lady. What caused your tweet was RoseAmbien. The side effects of RoseAmbien are listed as, public demonstrations of your inherent racism and getting fired.

That is the difference between righteous anger that leads to a justifiable “feckless cunt” moment, and racism that gets your ass canned. Roseanne was intolerant. Samantha was INTOLERANT OF INTOLERANCE. This is called, “The Tolerance Paradox“. If we welcome hate and bigotry into our house, we may as well hand them the remote and let them sit on our couch’s perfectly broken in, ass groove. Because by their very nature, they will not leave. And trust me when I say playing Scrabble with a racist is NOT a fun, family activity. The “N” word, does not sound any less rancid when followed by, “Oh! Yay! Triple word score!”

I do not believe that any form of speech, regardless of how hateful it is, should be regulated by the government. That doesn’t work, and it’s kind of a cop out. What I DO believe, is that hate speech such as racism and bigotry should be widely condemned by moral people. It should be harsh. It should be swift. It should be shouted at the top of our lungs.

Because when it comes to being called upon to tolerate hate, in the immortal words of the great American scholar Omarosa…

This is why when I see a video of the notoriously hateful, Tomi Lahren getting water tossed on her, I’m not really that sorry. In fact, I’m not sorry at all. This woman is so “white privilegey” that her 23 & Me results came back as paper pulp and ranch dressing. That is the TRUTH. As is the fact that everyone who follows her on social media, gets the first season of “Friends” on DVD. “Friends”, because… White people.

I sincerely don’t condone violence, but a splash of water on your back is the inherent risk involved with choosing “Hateful Bigot” as your career. And the two things that truly shocked me about this were: (A) She didn’t melt when the water hit her, and (B) She was with her mother.

She has a mother? I legitimately believed she was just spewed from the bowels of hell. Who would have guessed? 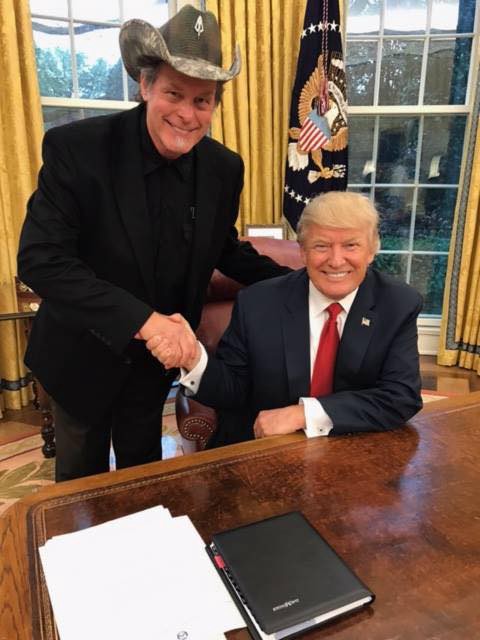 So here we have a rare photo of a raging case of scabies shaking hands with history’s worst toenail, fungal infection. I’ll let you decided who is who. Also, the President of the United States uses a paper planner? Does he also look up phone numbers in the Yellow Pages?

If false equivalences between blatant and unprovoked racism, and scorning someone based on their complicit and intolerant actions, isn’t enough to dill your pickle – perhaps hypocrisy is. Because since Roseanne got fired and Sam Bee didn’t, the White House (read Okefenokee Swamp on steroids) has been hotter than two rats fucking in a wool sock.

However, I point you to Ted Nugent. Humanity’s shart. The Deep Water Horizon Oil Spill in man form. Who in 1994 said this about Hillary Clinton…

“You probably can’t use the term `toxic cunt’ in your magazine, but that’s what she is. Her very existence insults the spirit of individualism in this country. This bitch is nothing but a two-bit whore for Fidel Castro.”

I’m guessing it’s the “feckless” part that they’re pissed off about? Because while they’re whining about how Sam Bee should be fired, they invited that taint on legs to come hang out in the White House. Yup. I guess Sam should have gone with “Feckful” cunt, and everything would have been fine.

No, Joe. You’ve got it backwards.

The mistake we made was the four decades prior to that, where we let them be racists without calling that shit what it was. Racism. We let it fester. I’m not sure why, because…

So now we’re at this insane moment, where we literally have to explain to people that calling bigots – as well as people who are complicit in said bigotry – out, is not the same as actually being a bigot.

Being called a racist only bothers people who are ACTUALLY racists. The truth hurts. There’s a saying that goes, “If you run into an asshole in the morning, you’ve run into an asshole. If you run into assholes all day long… YOU’RE the asshole.” If multitudes of people are calling you a racist, all throughout your life. YOU’RE A RACIST. If it upsets you to hear that, I suggest you stop being as Sam Bee would put it a, “feckless cunt”.

And the good news is, we have a cure… 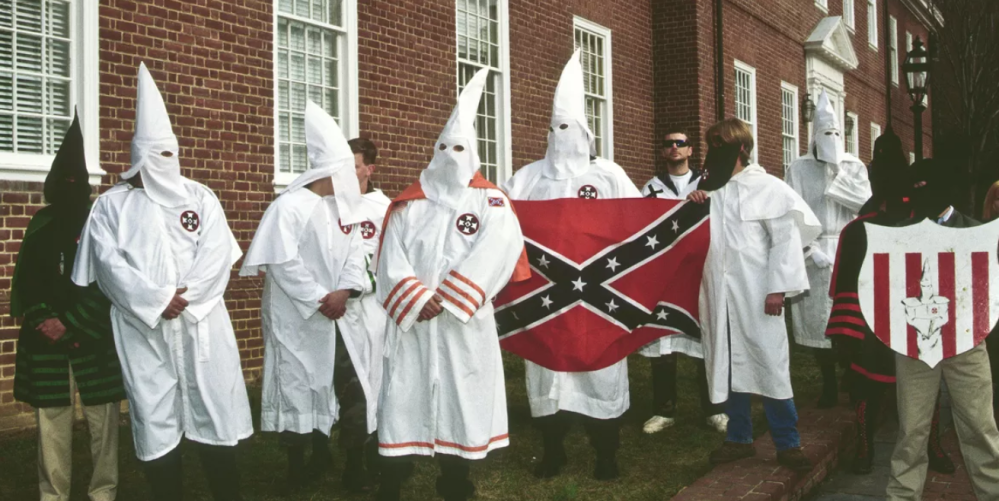 Whoa… Not that. Too much Ambien, boys.

No, the cure is, “Don’t-Be-A-Dick-At-All”. Because I’m pretty sure Jesus DID say that.